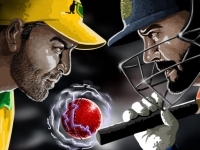 83%
Instructions
How to Play?

It's a world cup time. Pick your team and play some cricket. You can select your team from world champions. Choose from India, England, New Zealand, South Africa, Australia, West Indies, Sri Lanka, Bangladesh, Pakistan and Afghanistan The gameplay is simple you are going to bat against your opponent. Just tap on the screen to take a shot. Improve your batting skills and try to hit a hard six. Grab a bat and smash it. Play "Cricket World Cup" Cricket World Cup is a game which you will like playing at friv2015.com. Here you can find & enjoy Cricket World Cup game and several other Friv 2015 games online free of charges.

Use Left Mouse button to Swing/Select,